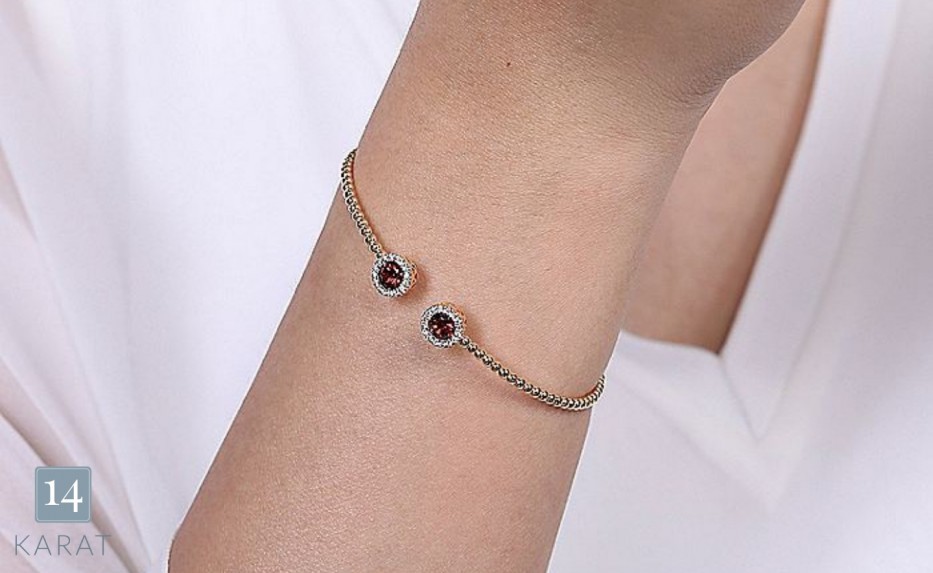 Cultures across the world have prized January’s gemstone for its beautiful colors, durability and symbolic meanings. The lucky people who are born in the first month of the year get to call garnet their birthstone and can wear it with pride. While traditionally January’s birthstone is thought to be red, garnet comes in a bunch of extraordinary colors like orange, green and even purple!

Our 14 Karat jewelry experts go over some of the other amazing facts and history of this month’s birthstone.

The history of garnet can be traced all the way back to the Bronze age with other references also being noted during the 3100 BC time frame in Ancient Egypt where the Egyptians would refer to garnet as the symbol of life. Garnet was also a popular stone in Roman times, with the stone being used in signet rings and in other jewelry to display wealth and opulence.

Garnet’s became extremely popular once again during the Victorian age. They would fashion garnet to look like pomegranate seeds all forming together to create a larger stunning piece. Even today garnets can be found in many different jewelry stores in many different pieces from beautiful solitaire rings to tiaras.

Garnets were primarily used for protection against evil. Native Americans believed that garnets would protect against injury and poison. During the crusades, warriors on both sides wore garnets into battle for protection. Deep red garnets are also thought to symbolize deep love and lifeblood. Garnets would be exchanged amongst friends as a symbol that they would once again meet up and reunite someday.

Where does garnet come from

Garnets can be found all over the world, but Africa is the world’s leading source of garnet gems. However, the Czech Republic, particularly Bohemia, was the leading source of red garnets during the Victorian age. Our 14 Karat jewelry experts point out that other leading countries in garnet production include Myanmar, Brazil, Iran, Afghanistan and more!

Garnets garner a 6.5 to a 7.5 on the Mohs scale, meaning they are durable enough for all jewelry styles but should not be worn when you expect a sharp blow could be given to them. Our 14 Karat jewelry excerpts say that warm soapy water is the best way to clean your garnet jewelry and steam cleaning should be avoided.

You can give someone born in January the perfect gift by picking them out some new garnet jewelry! Come and visit us at the Shops of Legacy, 168th and West Center Road, where our 14 Karat jewelry experts can help you to pick out an amazing piece from our collection or create your very own custom jewelry piece!

he lucky people who are born in the first month of the year get to call garnet their birthstone and can wear it with pride. While traditionally January’s birthstone is thought to be red, garnet comes in a bunch of extraordinary colors like orange, green and even purple!