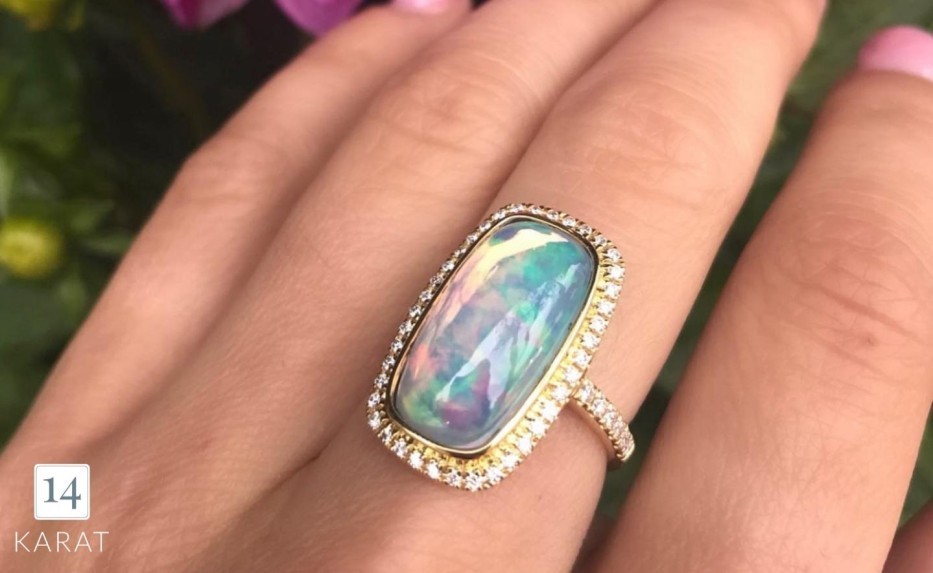 The opal and tourmaline gemstones are the birthstones for those with October birthdays. Of the two, the opal is typically the most known gemstone for this month. Opals have a plethora of color combinations and unique characteristics.

Our custom jewelry Omaha experts are here to explain everything you need to know about the opal. This includes where it comes from, the meanings that are often assigned to the gem, what makes it so unpredictable and why many people are drawn to this beautiful stone.

Opals date back to around 4000 B.C. The name is derived from India where it was called “upala,” meaning “precious stone.” Then, in ancient Rome it became known as “opalus,” where it symbolized love and hope. Artists and writers have compared opals to fireworks, volcano fire and galaxies.

Most opals come from Australia. However, Ethiopia, Mexico and Brazil are also sources of this phenomenal gemstone. The opal has also been discovered in Central Europe, Honduras, Indonesia, Madagascar, Peru, Turkey and the United States.

Different cultures credit the opal with different powers. The Ancient Arabs believed it fell from the Heavens during lightning. The Ancient Greeks believed that it gave them prophetic abilities and protected them from diseases. As for the Europeans, they believed the opal represented purity and truth.

“Anne of Geierstein,” a novel written in the 1800s by Sir Walter Scott, made some believe a superstition that the opal was unlucky for anyone not born in October to wear. However, throughout history, the opal has actually been regarded as the luckiest and most magical gem because it shows all the colors.

The opal is amorphous, meaning it does not have a defined crystalline structure. It’s unpredictable because it takes on many shapes and colors. Many people value opals because of their shifting colors in the hues of the rainbow, which is also referred to as its play of color.

There are two main types of opals: precious and common. Precious opals showcase their play of color. They often proudly display their hues of  orange, yellow, red, green, blue and purple under light. Common opals exist in one color and have no play of color. These ones appear glassy and transparent.

The opal is always in high demand because its many colors can suit different moods and tastes. The wider the range of color, the more pricey the opal is going to be. Opals are also given to celebrate the 14th wedding anniversary. It can be risky to wear an opal every day, and rings are the riskiest piece. An opal pendant necklace would be a great choice.

Opals have a hardness of 5.5-6.5, which is important when considering purchasing opal jewelry. Harder gems will scratch the opal. Lots of water and heat can cause the opal to weaken and crack, so it’s best to avoid lots of contact with those elements. The best way to care for an opal is to clean it with warm soapy water.

Opals are a wonderful gift for those born in October, those celebrating a 14th wedding anniversary and anyone who is attracted to the gem. Our custom jewelry Omaha experts can help you find the perfect piece no matter the occasion. Come see us today!

Learn all about October’s birthstone, the opal!