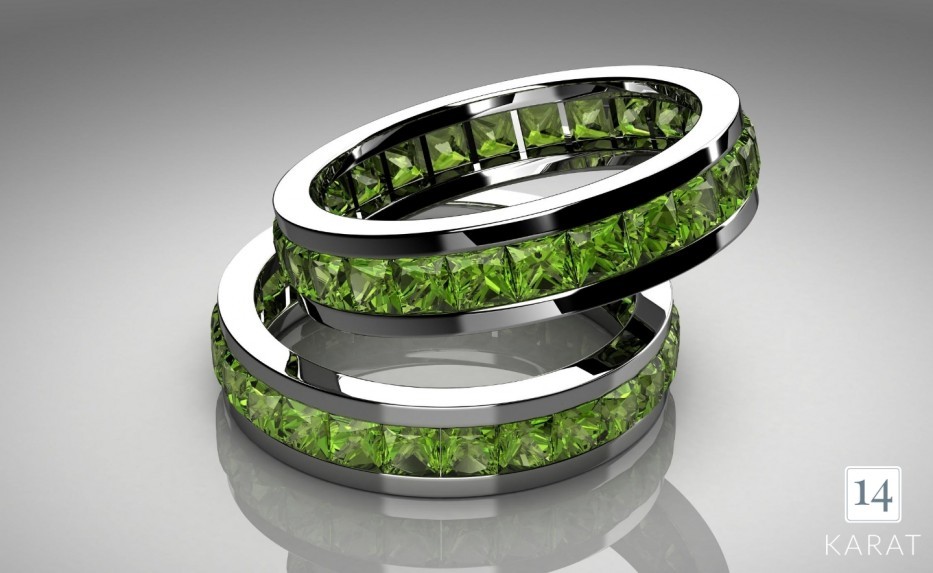 August is one of the special months that  has more than one birthstone. The  birthstone originated as sardonyx. Later spinel and peridot were added to the mix, giving August babies plenty of gemstones to play with and colors to explore. Over time, peridot has turned into August’s main birthstone.

The peridot August birthstone has a long history and some beautiful attributes associated with it and would make the perfect gift for someone special in your life!

Peridot can be dated back as far as the second century BCE and found among many cathedrals, chalices and jewelry of ancient times. How peridot came by its name is a bit of a mystery. Some people believe that it comes from the Arabic word faridat meaning gem while others believe it comes from the Greek word peridona meaning plenty.

Peridot was very popular due to its “protective” properties that many cultures believed in. It was thought to dissolve enchantments and ward off evil spirits. The ancient Romans specifically would wear peridot into battle believing it brought them extra strength and protection.

Even now in more modern times, peridot is associated with good virtues such as prosperity, loyalty, love, honesty, faithfulness and optimism. There are many people who believe that wearing peridot jewelry will focus them and increase their will power in order to attain their dreams.

Peridot is a gem quality stone of the mineral olivine, which can be found deep inside the Earth’s mantle and brought to the surface by volcanoes. The peridot August birthstone is rare in the fact that it is one of the few gemstones that comes in one color. Although, depending on how much iron there is it can change its hue from a yellow-green to more of a brown-green.

The most prized peridots are never too light or too dark and are well saturated with color. Some peridots are even mistaken for emeralds due to the way they shine under fluorescent lighting. Some historians even believe that Cleopatra's famous emerald collection could have in fact been peridot.

Where to find it

The peridot August birthstone is unique in the fact that while it can be found from mining sources in places like China, Myanmar, Pakistan, Tanzania, Vietnam and the United States, but it can also be found from volcanoes and meteorites! In fact, Hawaiians used to believe that peridot gems were symbols of Pele’s (the Hawaiian volcano goddess of fire) tears. Meteorites are less likely to hold gem quality peridot, but they can still be found!

Some of the most beautiful pieces of peridot jewelry are found in Myanmar, but some locally sourced peridot gems in the United States come from Arizona.

Caring for a peridot

Peridots are around a 6.5-7 on Mohs scale of hardness, so it would not be the greatest gem for daily use. When cleaning the peridot August birthstone, it is best to use a soft-bristle brush and warm soapy water.

Let our 14 Karat jewelry specialists help you to pick out the perfect gift for your special someone born in August! Any of our pieces featuring peridot would be a great addition to any girls’ jewelry collection. We can even help you to create a custom piece! Come and visit us at the Shops of Legacy, 168th and West Center Roads.

The peridot August birthstone has a long history and some beautiful attributes associated with it and would make the perfect gift for someone special in your life!