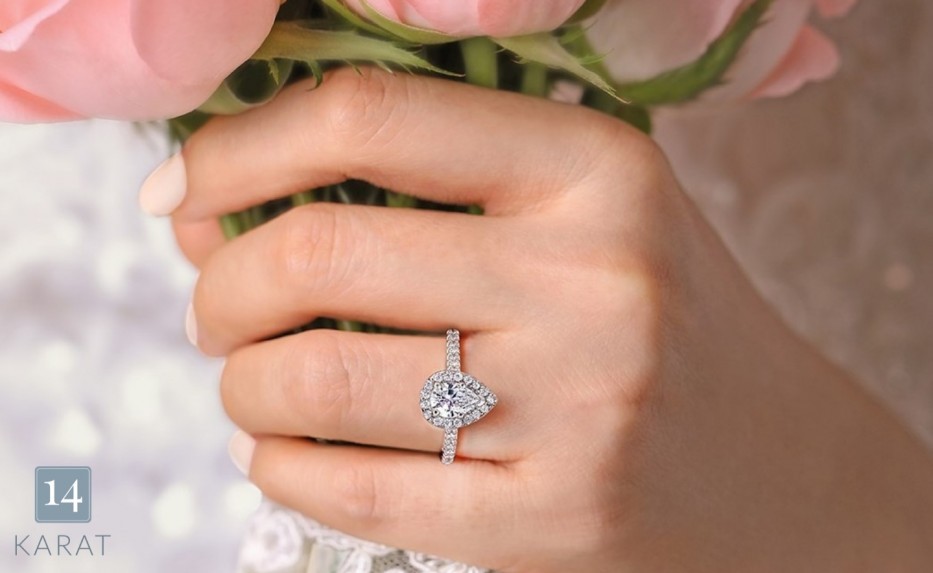 Just like with other bridal trends, there are engagement ring styles that come and go, surging in popularity one decade and fading the next. The evolution of engagement rings shows that trends may come and go, but there are also some style elements that are timeless. When looking back at rings from previous decades, you can see the inspiration for today’s styles.

Our engagement rings Nebraska jewelry experts start with the most popular styles from the 1920s and move up by decade to present day to showcase the top engagement ring trends.

The 1920s is when art deco jewelry was having its moment. Think Gatsby geometric shapes with lots of clean lines and shapes. Emerald cut diamonds and asscher diamonds were especially common for this reason, with some extravagant rings having halos. We see inspiration from the 1920s in today’s rings that feature pave diamonds across the band.

Once a new decade was upon everyone, brides wanted to stray away from those hard and clean lines of the 1920s, and preferred rings with more flow. Feminine embellishments and twisted bands became all the rage. People wanted a larger singular stone instead of many different diamond accents.

De Beers launched their “a diamond is forever,” campaign in the 1940s and it greatly affected engagement ring trends. This is when round cut diamonds had their time in the sun and rings started being made in yellow and rose gold due to platinum shortages.

A few different trends started emerging in the 1950s, with one of them being the emergence and popularity of pear shaped diamonds. Center stones started to get a little larger, and three stone engagement rings also reigned supreme. Our engagement rings Nebraska jewelry experts say that these side stones were usually just accent diamonds, like small baguettes on each side.

The 1960s ushered in an era of glam with style icons Jackie Kennedy and Elizabeth Taylor having heavy influence in this decade. More unique rings became popular with colored gemstones, unusual shapes, and even two stone rings trending.

Along with the big hair, people wanted more from their engagement rings during this time period. Engagement rings were made to make a statement, with alternative gemstones mixed with diamonds becoming popular thanks to Princess Diana’s ring. Elaborate fancy-cut diamonds like pear shape and emerald cut were also extremely popular.

The 1990s were all about grunge and edgy engagement ring styles. Yellow gold took a backseat and white gold and platinum came back as the main types of metals used. This decade is when sharper shapes like the marquise diamond sat as the center stone. Solitaries and simple three stone rings also rose in stature as minimalism took center stage.

White gold and platinum metals crossed over into this decade as well, being the primary metal of choice for all settings. 2000s saw the rise of the modern day halo too, with smaller diamonds surrounding a larger center stone to make the diamond appear larger and stand out. This decade not only had halos, but the creation of the double and even triple halo emerged.

Our engagement rings Nebraska jewelry experts look forward to what trends the 2020s will bring us! If you need help picking out a stunning engagement ring or want to create a custom design from scratch, contact us!

Just like with other bridal trends, there are engagement ring styles that come and go, surging in popularity one decade and fading the next.