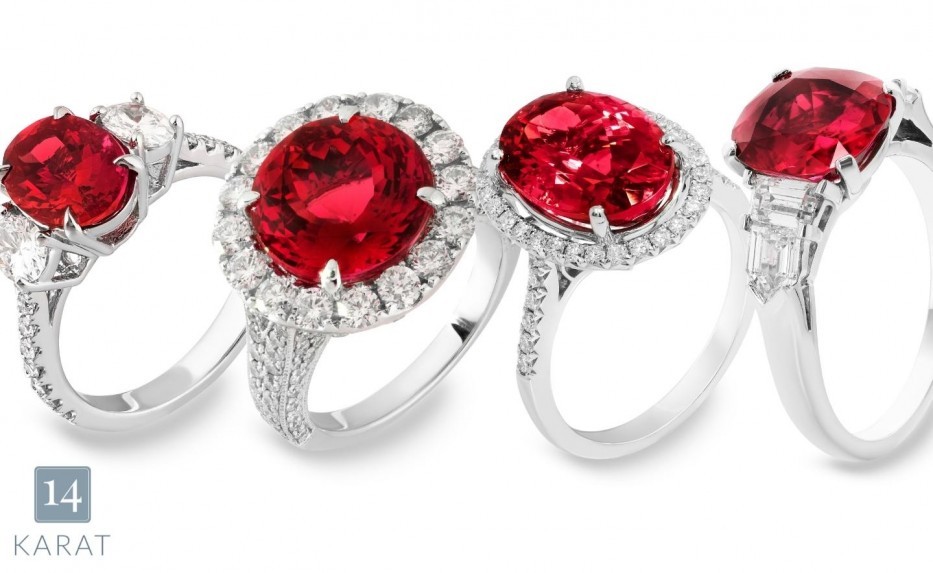 Ruby is the birthstone of July. The dark red color of the ruby symbolizes love, passion, and raw emotion. The ruby encompasses all of those things, as well as wealth and protection. Rubies are most commonly given as 15th and 40th anniversary gifts, but can also be given to those who have July birthdays.

The ruby gets its color from the chromium element, as does sapphire. The more chromium present, the stronger the red. Chromium also causes fluorescence, which intensifies the shade of red, making it more valuable. Rubies typically form in marble or basalt rocks; the ones formed marble are more sought after as their fluorescence is higher.

Below our custom jewelry Omaha experts showcase the origins and uses of the ruby.

Some of the first humans who found rubies believed they contained drops of Mother Earth's blood, coining them as youthful and powerful. Rubies were first traded along China’s North Silk Road as early as 200 BC. Hindus believed rubies would shield them from enemies, so they used them in armor for noblemen in China and India.

Rubies were also used to tell if bad luck was to come; they were said to turn a darker shade of red, giving you time to prepare. 400 years later, Burma became a significant source for rubies. Today, Burmese rubies are the most yearned for. In the 1990s, Myanmar began producing heat-treated rubies, which is still a practice used today.

The word ruby comes from the Latin word “ruber” which translates to red. Ancient Hindus called the ruby "rajnapura” which means “king of precious stones.” The ruby is rare and has a hardness similar to the diamond, the diamond scores perfect 10, and the ruby doesn’t fall far behind at a 9.

When it comes to crystal healing, the ruby can be used to alleviate body pain and help with circulatory blood flow, heart problems, and low energy. They are still thought to promote vitality and youth. It can overall inspire better health in these areas of life.

The bold red of this gem is a statement color, and everyone looks good wearing rubies. The purest shade of red is the most popular ruby, but it also can be found with hues of orange or purple. Several factors impact the cuts of rubies, as it’s important to keep the color and hardness intact. Common cuts are round, triangular, emerald, pear, and marquise.

The ruby is durable, making it great for everyday wear as a necklace, ring or earrings. It’s easy to care for and clean a ruby, using soapy water and a soft brush. Knowing if the gem has been heat-treated or if it’s synthetic or natural will help you know how to best take care of it. Just ask your custom jewelry Omaha specialists!

Your custom jewelry Omaha experts can help you pick the perfect ruby jewelry, whether it be for an anniversary or birthday. You have many options, including ruby stud earrings, a ruby stacking ring, or you can create a customized piece if you already have a stone. Come and visit us!

Get to know July's birthstone.